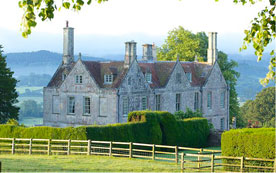 Hatch House consists of the picturesque remains of a 17th century manor house, the former home of the Hyde family (Anne Hyde was the mother of Queens Anne & Mary). The house was partly burnt down in the 18th century. It was bought in the 1840s by the Bennet family, from whom the Rumbolds are descended. The Bennets resurrected the house in 1908, employing the romantic Arts & Crafts architect, Detmar Blow.